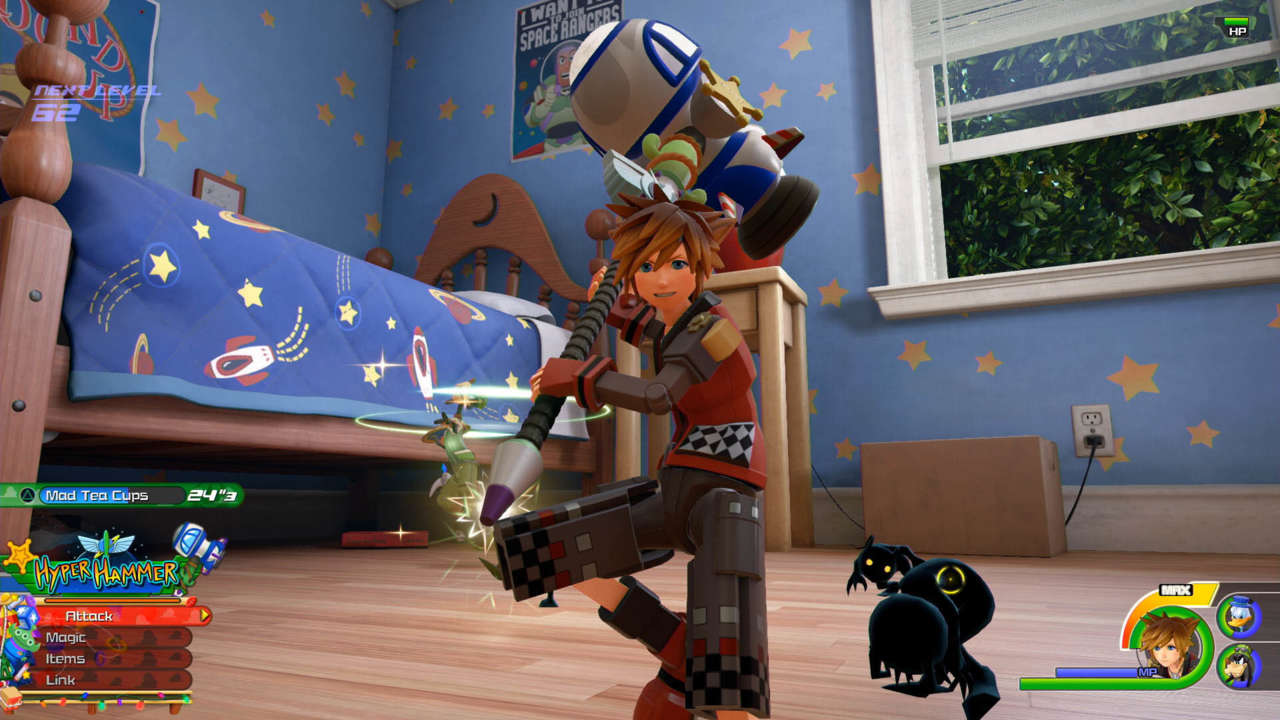 The long-awaited conclusion to the story is off to a strong start in sales after just one week.

The KH3 Out of Bounds Experience Explored.

Hello, hello. It’s me again. I’m glad to finally have out the Boundary Bustin’ chapter of my Kingdom Hearts saga. Data Greeting turned out to be pretty rad, though for the wrong reasons. Going where the game doesn’t want you to can be loads of fun. And now i want more data greet locations. I’m going to be doing a second part to this video (More of a deleted scenes concept than a sequel.) But yeah. I’m not sure when, cause there’s countless other videos i still have to make, but i have the footage already. Anyway, remember in the descrip of my last video when i said this should be a quick one? Yeah, i was wrong about that. What else is new? There wasn’t a whole lot of work that had to go into this one. (Compared to most of my videos anyway.) But it was just difficult to push myself to make it. Idek why. Some days i’d genuinely get a couple sentences worth of editing done, tell myself i’ll come back to it, then not return till the next day. Is that burn out? I think that’s burn out. I could’ve had this done in 2 weeks at a steady pace. I should have had it done within 3 weeks. Now it’s at 4. Oh well. What are you gonna do? My next video involves a blue hedgehog. A script i wrote just kinda on the fly a couple months back. The voice over has been done for quite a while now. It should be fun. Though there’s much bigger projects i still need to get to. My Mario video is way overdue, though i finally played through all 3 of ’em. And i have a Zelda video that’s been kicking around in my head for a couple years now. Scripts done, but that’s basically it. Some people probably won’t be happy with it. Sorry in advance. It’s not a personal attack. Or even really an attack at all. Those are a couple big names that will hopefully get some clicks. It’s a view drought over here. I don’t want to complain much, but it’s kinda not all that cool putting countless hours into something hardly anyone sees. But i’ll keep on keeping on and on and on. I want to finish my FFVII series before there’s any glimpse of part 2. But who knows if that will happen. It’s just i’ve had this predictions video planned since i finished the game, and it would be pretty pointless to still make it if news or a trailer would come out. Though i have had a couple years already to finish up. Still 3 main videos left to compare. Two of them should be on the shorter side though. Oh and Melody of Memory’s video. Now that boundary bust is out i can edit that one. I mean, not immediately, but that one i want done before a new KH game comes out. Besides that my sonic series and indie series are both pushed back again. And i almost made a Lucky video for Janurary, but then didn’t. Eventually. Anyway i’m tired, i’m just waiting on this export. 65% at this point. Dang. I’ve got to go. I’m gonna hang with my cat Theo for a bit. You know him, right? He’s been in quite a few of my videos. He’s recovering from a surgery right now, but he’s doing great. You’ll see him again soon. Alright. Anyway. See ya in six to eight weeks probably. Maybe. idk.

Kingdom Hearts Melody of Memory is coming to the PS4, Xbox One and Nintendo Switch but it seems like some Switch owners didn’t like the game was even announced in the first place. Switch continues to dominate the NPD with these crazy sales records!
#KingdomHearts #KingdomHeartsMelodyOfMemory #NintendoSwitch
Sources:
https://nintendoeverything.com/kingdom-hearts-melody-of-memory-announced-coming-to-switch/
https://twitter.com/MatPiscatella/status/1271425658980143106
Become a ELITE Ninja! https://www.youtube.com/channel/UCmhLWUxwTyFJqHt4h0lSUsQ/join
Subscribe!: https://www.youtube.com/user/penintendo
Donation Link: https://streamlabs.com/penintendo/tip
Or Paypal: https://paypal.me/playeressence
All donations are used to improve the quality of PlayerEssence! PLUS you get your name featured and a shout-out!
Subscribe to the 2nd Channel OJX!
https://www.youtube.com/channel/UCiEzwPaRrI573dUgTG5tLxA

Welcome to Vlog #2: FFXIV Shadowbringers info, Kingdom Hearts 3, and 100 Subs Goal! In this video, I’ll be discussing the details of the new expansion for Final Fantasy 14, Shadowbringers and what comes with the collectors edition, Kingdom Hearts 3 shattering the franchises sale record in its first week, and how we shattered the goal of 50 subscribers in one month, by getting 100!

Don’t forget to subscribe and ring that notification bell, so you don’t miss out on all this great Final Fantasy content, and for more top 5’s right here on Soldier_1stClass!

This is Soldier_1stClass, reporting for duty!

Going down in the record books as the only YouTube channel to “um actually” itself.